Nowadays, however, children’s entertainment is seen as an essential part of those high knees – and even the Supersonic Festival in Birmingham has a concert and activities for children every year. Camp Bestival is undoubtedly the pinnacle of family music festivals. This year, Rob Da Bank’s musical empire has expanded beyond his usual south coast stomping grounds and ventured into the West Midlands.

Weston Park is no stranger to music festivals and has hosted the V Festival for the past few years. So it was a proven location with plenty of caves and wooded areas for fun kid-centric activities as well as enough space for multiple scenes. relied on a decent spread of musical entertainment, from the mainstream assuredly to the really quite exiting. However, pretty much the only drug taken over the weekend (aside from the weird puff of weed) was Calpol.

While Camp Bestival Shropshire was open for four days, none of the main stages were operating on Thursday. That said, that didn’t mean it was a day without music and we were greeted by the sight of a large group of bubbly pop tweens going crazy with children’s entertainers channeling Boney M at our premiere. visit to the main arena, plus the caffeinated folk music of Farmyard Circus and the aerial acrobatics of Above and Beyond before we even found the bar. The highlight of the day, however, was undoubtedly Junior Jungle who rocked the Caravanserai scene.

Junior Jungle’s show involved a skinny white dude, giving Mr Motivator-type vibes while getting tweens and their parents into some serious drum and bass tunes. However, instead of exciting the crowd with Mr. M’s wholesome entertainment, there were proclamations of “Anarchy does not mean chaos. It means watch yourself and live and let live’, ‘You’ll never watch TV again’ and ‘Here’s a GILF – a granny I’d like on Facebook’ while encouraging the little ones to dance on stage to compete for prizes of CDs. . It was absolute gas and we danced and laughed in equal amounts.

Winner of local TV show The Voice UK, Becky Hill headlined the first full day of Camp Bestival Shropshire with her daytime pop rave. You may be able to take the girl out of the talent show, but clearly you can’t take the girl out of the talent show, and the crowd was introduced to both her father and brother, as well as to all her family during Hill’s toothy, sugar rush show with hair extension. The little kids (and many of their parents) loved it.

Thankfully, there were plenty of other musical flavors to sample, including sets from Birmingham’s indie pop Bryony Williams and garage punkers Total Luck, as well as Tom Blackwell’s reggae, funk and hip hop flavored DJ set from Headfunk, even if their audience was a little thin. The Proclaimers also performed a crowd-pleasing set that included many hits, such as “Letter from America”, “Let’s Get Married” and ended, somewhat inevitably, with “I’m Gonna Be (500 Miles)” and a huge sing by the thousands.

Friday’s somewhat surprising star, however, was Gok Wan (picture above), who mixed a very fun purse house set while prancing around the stage and commanding attention, chain-smoking fags and mistakenly yelling “It’s your Saturday night.” He may not be the greatest DJ the world has to offer, but he put on a great show and had young and old eating out of his hand.

Saturday began with children’s TV superstar Mr. Tumble rocking tweens, their parents, and just about anyone within earshot of the park scene with a hearty version of “If You’re happy and you know it”, which more than set things up for a sunny day of fun. Elsewhere, Mr B – Gentleman Rhymer had the marquee in stitches with his comedic Jeeves and Wooster-style hip-hop, and Sara Cox did her 1980s pub DJ set, which would probably only get her paid in pints if she wasn’t part of the celebrity cult. Overall though, it was a day for those who fondly remember the early days of rave – culminating in Fatboy Slim’s seminal show on the main stage.

Before Norman Cook’s slot, there was a spirited, boozy performance by EMF in the marquee, which opened with an energetic “I Believe” before moving to “Unbelievable” and a cover of Happy Mondays’ “Hallelujah.” . They were followed by the cool reggae grooves of Dreadzone, which rocked the whole tent on tracks like “Rise Up”, “Zion Youth” and a rock cover of Lee “Scratch” Perry and Max Romeo’s “Iron Shirt”. .

Unfortunately we missed 808 State, as they were scheduled to play alongside Fatboy Slim’s DJ set, but it was a show that had a sea of ​​bodies, of all ages, bouncing and raving from the opening beats and more than made up for having to choose who to see. Inevitably there were snippets of “Praise You”, “Gangster Trippin'” and “Right Here, Right Now” but it wasn’t a set to play its own records in full by any means. Blending the likes of Abba and a wide variety of beats and grooves with a steady array of retina-searing visuals, it was a terrific sight, barely marred by some of the older crowd members booing the film with a Greta Thunberg’s address as things were coming to an end.

It wasn’t the end of the night by any means, and for those with the energy, there was still plenty to shake their hips over sets by Bobby Friction and Mr Scruff in the Bollywood tent, and a good few hours in the company of Bill Brewster at Sharpe’s Bar, who was enthusiastically mixing things up after the little kids had gone to bed. 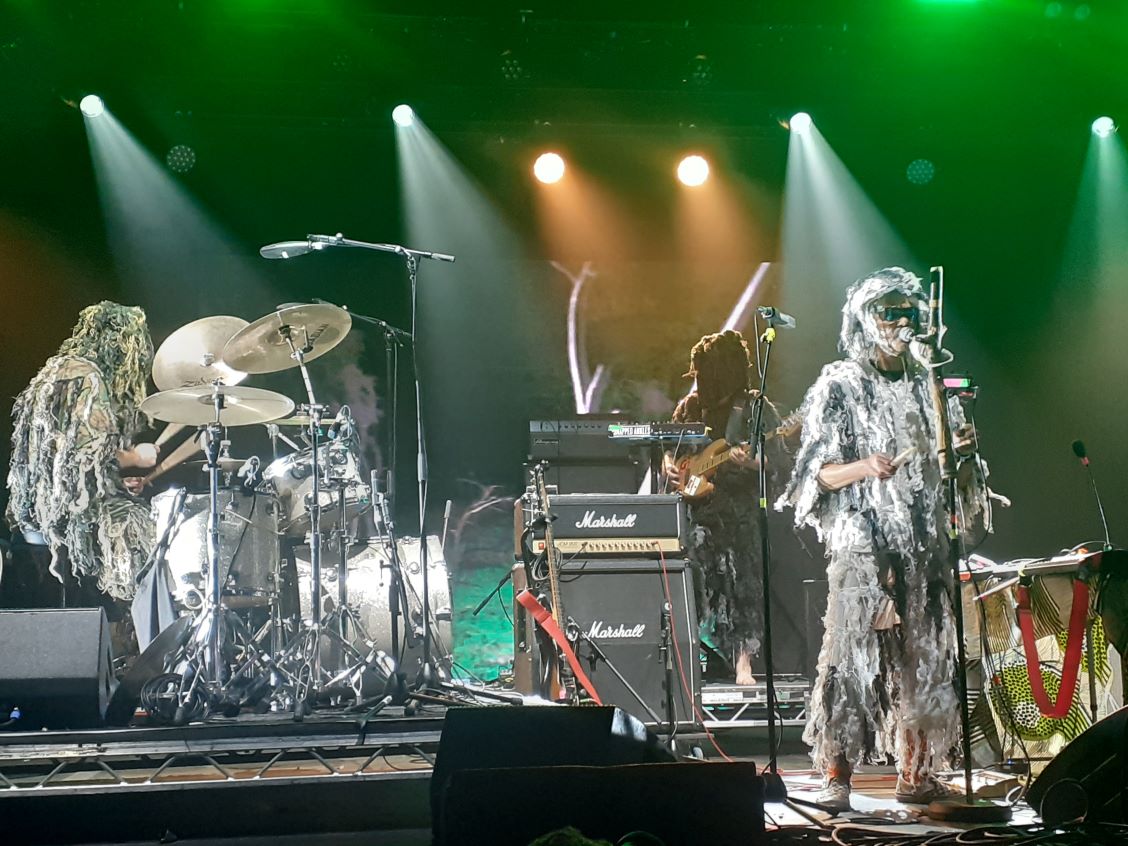 On the last day of Camp Bestival Shropshire, Horrible Histories took on The Terrible Tudors and Mr Motivator to entertain the first crowd at the Park Stage, but it was Elvana who got the most laughs with their mix of Elvis Presley and Nirvana. ‘School’ became ‘In the Ghetto’, ‘Dumb’ wandered into ‘You Were Always on My Mind’ and ‘Can’t Help Falling in Love’ mixed into ‘Heart Shaped Box’ – all bundled with a smirk. However, it was the pairing of “A Little Less Conversation” and “Smells Like Teen Spirit” that had young and old alike bouncing in the sun.

Elsewhere, Zion Train preached peace and love with a haunting bass line, the Dub Pistols laid down their catchy breakbeat ska, and Dom Joly told tales of television companies joking to pay for trips around the world to film saying things like “It’s a bit shit” in front of each of the Seven Wonders of the World, while coming across helpful notices in Chinese hotels that advised guests to “don’t do drugs and prostitute themselves”.

The main titles on the Park Stage of Sister Bliss and Rag’n’Bone Man were unfortunately a little disappointing, with Sister Bliss demonstrating the problems of DJing in the sun without a hype man to get the crowd moving and Rag’n’Bone Man giving off a distinct lack of charisma. However, they were both firmly overshadowed (if not by audience size) by the set of Snapped Ankles in the marquee. (picture above).

The shamanic psychedelic trance music of Snapped Ankles was not something one would have expected at Camp Bestival. But aging ravers and elementary school kids danced like maniacs, while various band members made regular forays into the crowd to join in the fun. It was a fine and somewhat unexpected icing on a tasty musical weekend cake that is certainly worth repeating next summer.

Have fun at Camp Bestival as revelers look forward to 2023

Thousands descend on Weston Park this weekend for Camp Bestival